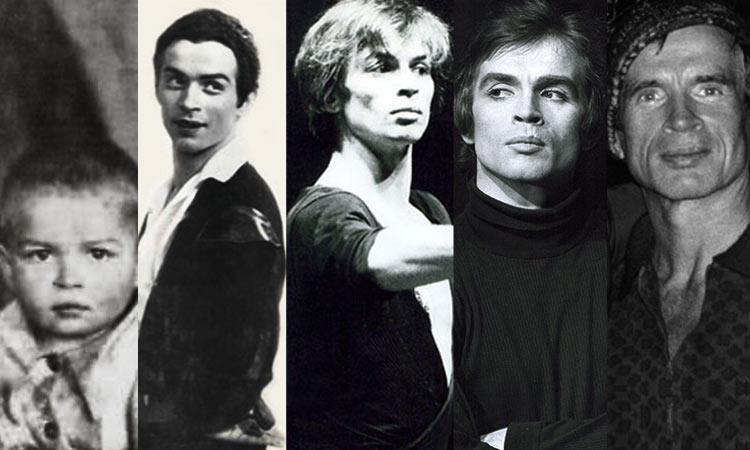 1938March 17. Birth of Rudolf, fourth child and only son of Hamet and Farida Nureyev, aboard the Trans-Siberian express, near Lake Baikal. He spends his childhood and youth in Ufa, capital of the Soviet Republic of Bashkir. His parents are Tartar Muslims.

1958For the school’s graduation concert, Rudolf Nureyev dances the pas de deux from Le Corsaire with Alla Sizova. He joins the Kirov (ex-Marinsky Theatre) Ballet in Leningrad, the most important dance company in the USSR, as soloist.October 28. Debut at the Kirov in the pas de trois in Swan Lake.

1961Kirov Ballet tour, Paris. Rudolf Nureyev’s success is stunning from his very first appearance on stage at the Palais Garnier on May 19, in Act III (Kingdom of the Shades) from La Bayadère.June 16. Rudolf Nureyev “chooses liberty” and demands political asylum at Le Bourget airport instead of boarding an airplane to take him back to the USSR. He joins the Ballets du Marquis de Cuevas the next day. Decisive encounter with Erik Bruhn, principal dancer with the Royal Danish Ballet.

1962Departs for Copenhagen to study the Bournonville style with Erik Bruhn.February 21. First performance of Giselle with Margot Fonteyn and the Royal Ballet at Covent Garden. Rudolf Nureyev becomes guest artist with this company and continues as such until 1977

1963March 12. Premiere of Marguerite and Armand, choreography by Frederick Ashton for Margot Fonteyn and Rudolf Nureyev. It becomes their fetish ballet.November 27. Rudolf Nureyev remounts a choreography by Marius Petipa for the first time, Act III (Kingdom of the Shades) from La Bayadère for the Royal Ballet. His career quickly becomes international. He dances as a guest star with all the major ballet companies in Europe, the United States and Australia. He dances the princes of the repertoire as well as creations by Frederick Ashton, Rudi Van Dantzig, Roland Petit, Maurice Béjart, George Balanchine, Glen Tetley, Martha Graham and Murray Louis. His insatiable curiosity leads him to try all dance styles. He also remounts the great 19th century Russian ballets by Marius Petipa, a choreographer he reveres: Sleeping Beauty,The Nutcracker, Don Quixote, Swan Lake, Raymonda. He choreographs Tancredi and Manfred.

1983Rudolf Nureyev becomes dance director at the Paris Opera Ballet, a position he holds until 1989.
He brings new life to the company, invites numerous modern choreographers and teachers, choreographs Cinderella and Washington Square….

1989Finally obtains long-waited approval from the Soviet authorities to return to Russia and dances La Sylphide at the Kirov Theatre in Leningrad, where he had not returned since 1961.He can visit his dying mother during a short trip to USSR.

1990He performs in the musical comedy The King and I in the United States.
He performs “Song of a wayfairer” for the last time at the Paris Opera Devoted himself to orchestral conducting.

1992October 8. First performance of La Bayadère, remounted by Nureyev based on choreography by Marius Petipa, at the Palais Garnier.

1993January 6. Rudolf Nureyev dies at the age of 54, at the Hôpital du Perpétual Secours in Levallois-Perret, near Paris.Rudolf Nureyev was buried at the Russian cemetery of Sainte-Genevieve-des-Bois near Paris.

dolor luctus vulputate, sed id Donec libero eget elementum dictum ipsum diam
By continuing your browsing on this site, you agree to the use of cookies. En savoir plus.